I think I just totally made up this word, “finity”.  Google has never heard of it, at least.  But it is a word that I thought should be in the English language to describe the properties of a number that is NOT infinite.  I’m not so sure the word “affinity” appropriately describes what I’m talking about… regardless… lecture my on vocabulary later.  In this blog, I will attempt to put into perspective the extent to which 64-bit memory addressing in computers is NOT infinite, but finite.

When TCP/IP was introduced to the world with a  32-bit address for every computer connected to the internet, not a single soul ever predicted that 4.2 billion IP addresses would not be enough to cover the connected devices all around the world.   In the mid 90’s however, the IP-addresses were basically already used up, and static IP addresses were given out sparingly while internet users with multiple devices used NAT gateways to bridge intranets to the internet.

At the same time, when computers started moving to 32-bit memory addressing, no one predicted that computers would ever have more than 4GB of RAM installed.  After-all, hard disks were considerably less than 4GB back then.  In  fact the first IBM PS/2 to come equipped with a 32-bit Intel processor sported just 1 or 2MB of RAM and offered 44MB, 70MB, or 115MB hard-disk options.  As I’m sure you’re aware, Hard-disk storage space (the amount of capacity you have to permanently store your photos and videos) is typically considerably larger than RAM installed in your computer (which defines how much data your computer can hold onto at the same time, in a temporary capacity).  The top-of-the-line IBM sported a 57:1 Disk/RAM ratio, and  I’m sure the 2MB RAM/115MB Hard disk configuration would cost you a pretty penny back then.

Since then, the standard quantity of RAM loaded onto your average computer has grown 8000 times in size and the Disk size has grown over 13,000 x for a typical system these days. 8-12GB of RAM (8000-12,000MB) being pretty standard for most consumer laptops these days and 1TB Hard-disks (1,000,000MB) being pretty common for hard disks.    Servers are a whole other bag which I will not get into.

We started feeling the pinch of the 4GB memory barrier a while ago (the maximum technically addressable by a 32-bit machine), and makers of operating systems, like Windows, and Linux, and Mac OSX eventually had to recompile and retest all their software to work with with larger address models.  These days if you buy a laptop or tablet device with more than 2-4GB of ram in it, it invariably has a 64-bit OS loaded on it.  But, when, if ever, will we hit the 64-bit barrier?

It is roughly 4.2 billion Millimeters from San Francisco to Washington DC.


Instead, let’s think about a multi-dimensional problem that we, as humans, can easily relate to.

64-bits is roughly enough to account for 4.2billion squared. By thinking about the limits of 64-bit in the square sense puts it into a perspective that we can understand.  For example,  it is around 4.2 billion millimeters from San Francisco to Washington DC. 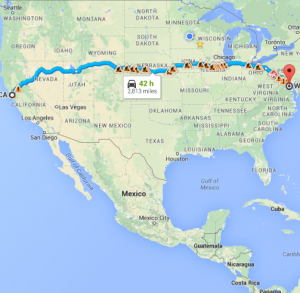 If we took that and squared it, we would have a chunk of the globe that looked roughly like this:

With 64-bits we can load every square millimeter of this chunk of the earth, assuming our color depth was limited to 8-bits, or one-byte.

8-bits of color data isn’t exactly photo-quality, but it is usable.  A 1mm /sq resolution resolution isn’t good enough to read the date off of a penny… although it is a lot of data.  If we wanted 32-bit color, we would be able to only handle 1/4th of this picture, so.. only USA west of the center of the Dakotas, excluding Mexico.  Still… this is a LOT of data, and it is exciting to think about.

One thing is for certain.  As the world moves closer and closer to these limits, humans are going to rely more and more on computer algorithms, and dare-I-say, artificial intelligence, simply to deal with the intricacies of possessing all this data. And computer programmers are going to have to work on an increasingly macroscopic level in the future in order to search, validate, and catalog all this data.

Finally, to further put this into perspective… what if we were dealing with volumetric data? My calculator won’t tell me what the cube-root of a 64-bit number is, but it will tell me what it is for 63-bits.  63-bits can address roughly 2.097 km of data cubed at a 1mm ^3 resolution.  This, dare I say, is very finite.  If you want nanometer resolution (for microscopes) then you’re limited to a mere 2mm cubed region of data.

What will the world of computers look like when we’re pushing the boundaries of these limits? I dunno. I know that it is fun to ponder, however.